A phenomenon that I frequently see from the Avenues on cool mornings is a pronounced pool of haze when I look southward over the Holladay and Cottonwood Heights area. 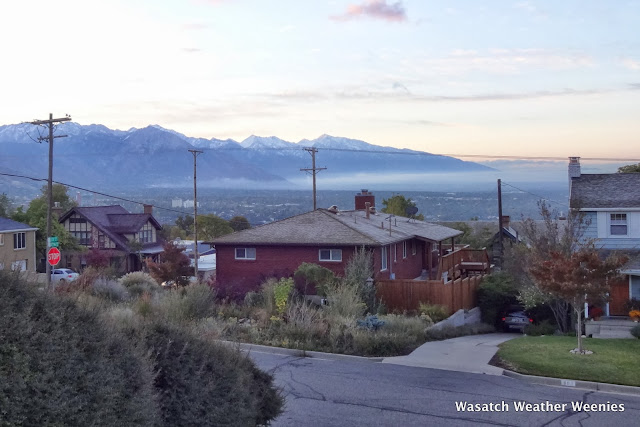 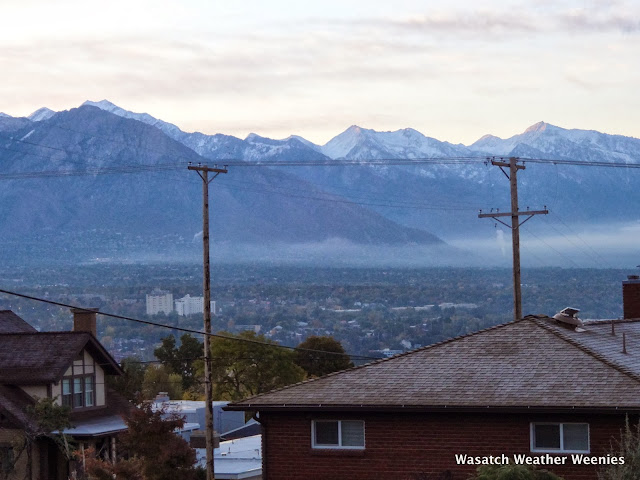 For such a haze pool to form, one typically needs high relative humidities, so a cool morning after a storm is best.  I've always assumed that the northern edge of the haze pool lies at the southern edge of the outflow from Parley's canyon.  There is some evidence supporting this view in this morning's MesoWest observations.  Note in particular the 15 knot exit jet near Parley's Canyon, whereas the flow is weaker to the south in Holladay and southern Olympus Cove.  In addition, the outflow from Parley's canyon is warmer (39ºF) and drier (RH=64%, not shown) compared to the airmass over Holladay and southern Olympus Cove where it is cooler 30–36ºF (RH=87–100%).

Haze typically needs a relative humidity of at least 70% to form, so this temperature and humidity contrast is consistent with northern boundary of the haze in the photos above.  In some instances, the outflow from Parley's may be colder than the air to the south, but in this and other cases with a visual haze pool, I suspect there is a cold pool over the Salt Lake Valley that is simply scoured out by the Parley's outflow.

There are also times when the outflow from Parley's canyon curves southward and then eastward toward the Wasatch near the Cottonwood Canyons, forming what is known as the "Sandy Eddy."  This eddy results in upslope flow in the Cottonwood Heights area.  Although such flow is not evident in the surface observations above, which shows calm air or very light down-slope flow at low levels, it could be occurring aloft.   Note the slight tilt of the smoke plume toward the Wasatch in the close-up photo.  This might explain the thicker haze in that portion of the haze pool, although that might also be related to emissions from whatever is generating that smoke plume.
By Jim S Posted at 10/15/2013 08:13:00 AM