Perspectives on the Early Season Snowpack

With only 10 shopping days left until Christmas, I thought I'd take a look at what the typical snow depth is on Christmas morning at Alta.

The MesoWest group at the University of Utah has received real-time weather data from the Alta-Collins site since 1997 (special thanks to everyone at Alta who makes this possible!).  Since then, the average Christmas morning snow depth is 63", with a minimum of 44" in 2002 and a maximum of 104" last year. 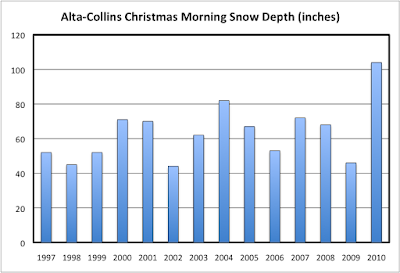 Those are fairly healthy early season numbers.  The Christmas snowpack at Alta is one of the surest bets in North America.  This is especially true in an era with snowmaking and grooming (although most people ski Alta for other reasons).

Where do things stand this year?  The Alta-Collins snowdepth sensor has not been reporting reliably the past couple of weeks, but the ski report presently puts the base at 32".

I've been looking at the medium range forecast guidance and think that we will be taking a run at the lowest Christmas morning snowdepth since 1997.  We might see a few flakes at times through tomorrow, but it's not going to add up to much.  Then it looks dry for a few days.  While we can't bank on it, the long-range forecast guidance is not suggesting a major pattern change before Christmas.  I can't rule out a storm, but the odds are low.  We will have to hope that Mother Nature doesn't listen to the models (sometimes she doesn't) and punches a storm into Utah if we're to get to even 40" by Christmas morning.  Otherwise, it could be tough sledding and skiing for Santa.
By Jim S Posted at 12/14/2011 09:06:00 AM