A three-alarm fire occurred last night in an office building in Sugarhouse.  Sixty firefighters fought the blaze, which stared around 2 AM and continued into the morning.  One firefighter was injured and we hope they have a speedy recovery.

I observed the smoke plume during a morning hike in the foothills.  At 8 AM, the behavior of the smoke plume was strongly affected by the stable cold pool that forms overnight in the Salt Lake Valley.  The smoke rose perhaps a couple hundred meters before settling back down and being transported by the local flows, as illustrated below. 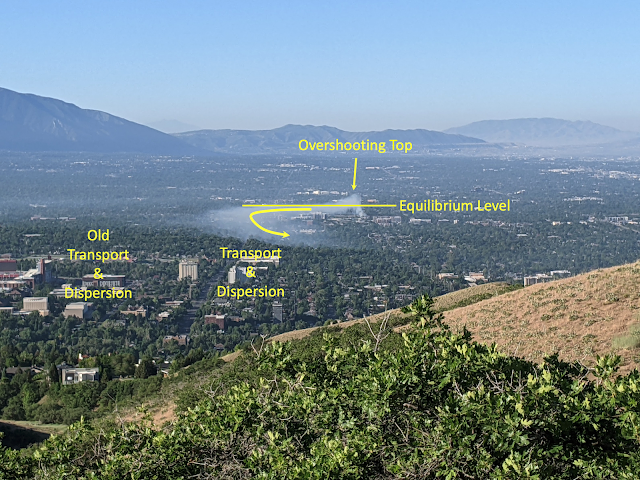 I've annotated several key features.  The heating of a fire results in warmer air than the surrounding airmass.  As a result, the air becomes positively buoyant and rises, resulting in an ascending smoke plume.  As it does so, it cools and, if the air is stable as is often the case in the morning near the Earth's surface, it will eventually reach a level where it has the same temperature of the surroundings.  At this level, which is known as the equilibrium level, the air is neutrally buoyant.  However, the air continues to rise because it has momentum, but begins to decelerate.  Eventually, the updraft dies, at the overshooting top.  Here, the air is colder than the environment, and settles back down to the equilibrium level.

In the photo above, the local flow was westerly at the fire site, resulting in the transport of smoke eastward (the photo is taken looking south).  However, near the time of the photo, there was an eddy present, so the smoke turned northward and then westward.  If you look carefully, you can see some smoke further east, above where I've added the label "old transport and dispersion."  Earlier that morning, there was a pronounced smoke layer here, suggesting that the eddy had just recently developed.

The behavior of the smoke changed rapidly, however, by 8:46 am.  Note how in the photo below the smoke rises vertically through a much deeper layer.  It is also being transported westward. 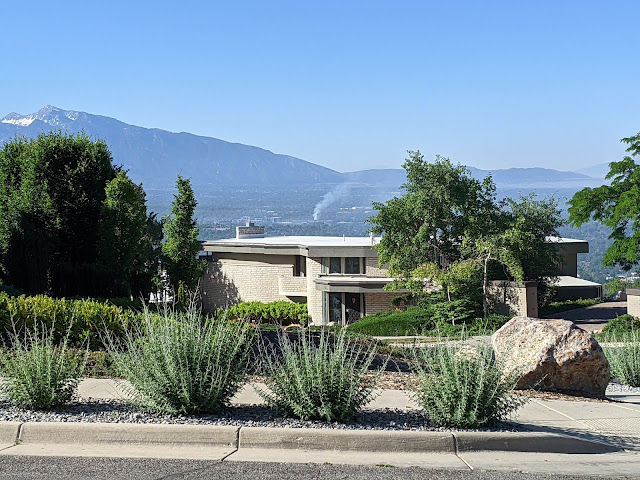 The vertical rise could be related to the warming of the air near the earth's surface.  At the University of Utah, where we collect 1 minute observations, the surface temperature increased about 5˚F during this period.  Another possibility is that the heat related by the combustion increased.  Either of these would result in a a warmer smoke plume able to ascend to greater heights.  In a wildfire, these two effects can be closely related since changes in the ambient atmosphere affect the combustion process such that wildfire intensity often increases during the day.

The shift in the orientation of the plume is more difficult to explain.  On short time scales of minutes to tens of minutes, turbulence in the atmosphere and other larger-scale eddies can cause smoke dispersion to be fickle.  The outflow from Parleys Canyon typically results in easterly flow (which would transport smoke to the west) in the morning in the Sugarhouse area.  However, this morning at one observing site there was a clear shift in the wind from easterly to southerly at about 8 AM (see the image below), when the flow was weak.  After that, the flow was S-SW.

These observations don't correlate all that well with the plume evolution, which illustrates the fickle nature of smoke transport and the challenges of using sparse observations to anticipate smoke transport during light wind periods.  This is a major challenge for anticipating the transport of smoke, pollutants, and other hazardous materials produced by fires, accidents, or terrorist incidents, especially during periods of weak flow.
By Jim S Posted at 6/13/2021 04:10:00 PM