January has brought a whopping...wait for it...16.5 inches of snow to Alta through January 19.  That's not a lot, but many driving through Little, Big, or Parley's canyon got bit by the red snake anyway.

Highway impacts from winter storms depend on several factors.  Snowfall amount can matter, but snowfall intensity, pavement temperatures, traffic, timing, and other factors can cause even storms with relatively small totals to cause huge problems.

Twenty-four hour snowfall total in the central Wasatch through this morning are in the 1-3" range.  However, most of that snow fell in the late afternoon with relatively high intensity, especially west of the crest, strongly affecting road conditions in the canyons.

The situation at the time was a bit unusual.  Winds at mountaintop level (e.g., on Mt. Baldy and at the top of the Snowbird tram) were weak and northerly as we were beginning the transition to the easterly flow that would develop overnight and produce downslope winds along some areas of the Wasatch Front.  However, upstream, northwesterly flow was impinging on the Wasatch Range over the Salt Lake Valley.  Some light easterlies were observed in the Olympus Cove area, but I suspect this was produced by local outflow from the precipitation area along the west slope of the Wasatch. 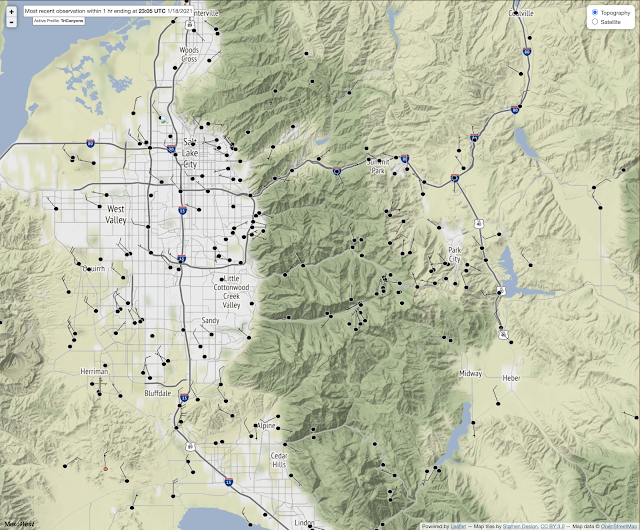 The afternoon sounding was consistent with the surface-based observations with northwesterly flow at low levels and very light flow at crest level (700 mb or 10,000 feet). 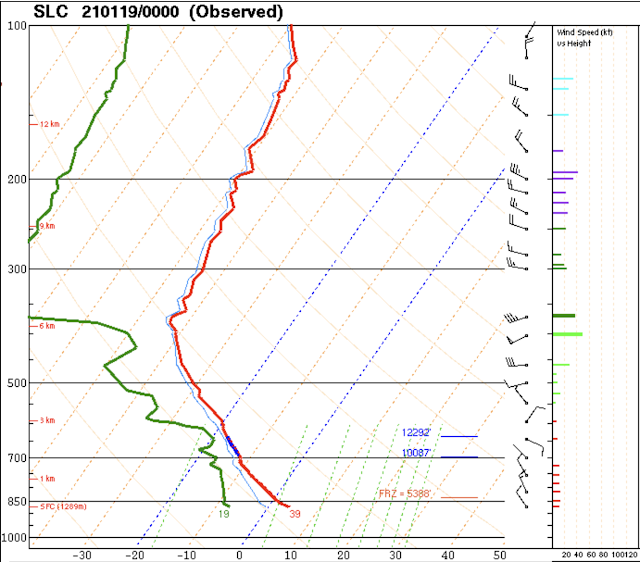 Thus, it appears that shallow, low-level upslope flow led to the frequent initiation of shallow convection over the westernmost portions of the central Wasatch.
Additionally, the layer from about 750 to 600 mb was between -10 and -20˚C, a temperature range known as the dendritic growth zone.  This is a range in which ice crystals, when conditions are right, can grow rapidly.  I was out walking yesterday with a world-famous meteorologist and we both commented about how even the smallest cumulus clouds were producing virga.
Finally, weak flow at crest level, these crystals had no where to go.  The fell out predominantly at and west of the crest.
This led to traffic armageddon in all three canyons as down-canyon traffic was picking up at the end of the day.  Below is the UDOT traffic camera at Alta showing the dreaded red snake at...wait for it...6:22 PM.
At that time, it appeared it wasn't even snowing anymore and I was seeing tweets claiming it took 2-2.5 hours to get down the canyon.  All of this, despite the fact that the Snowbird snow cam showed only about 3 inches on the stake.
And, to add insult to injury in this low-snow year, the strong winds last night have done their damage, transporting and beating up the snow. 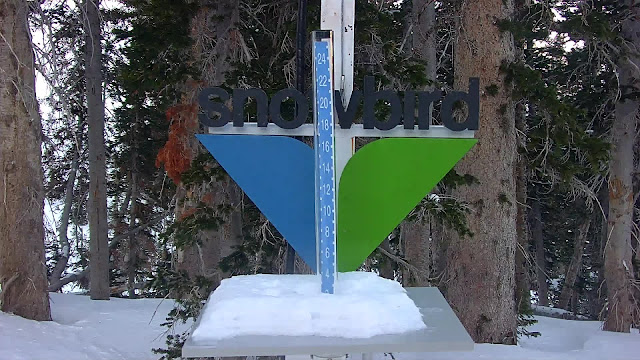