If there is one month of the year when a high-amplitude upper-level ridge is good in northern Utah, its October.

Ridges in the winter (November–March) are bad.  They bring drought to the mountains and cause a buildup of pollution in the valley.

Ridges in the summer (June–August) are bad.  They are obscenely hot and contribute to ozone generation and poor air quality in the valley.

I suppose that a ridge in April and May is OK, but nothing beats a ridge in October.

In October, a ridge also means no precipitation and for skiers, that's actually a good thing.  Everyone may get riled up for snow as the days shorten, but October storms rarely produce a deep snowpack, and thin snow just rots when a ridge finally build in, leading to avalanche problems later in the ski season (see the classic Wasatch Weather Weenies post Patience Young Jedi Knight).  It's better if the storms hold off for most if not all of October, and then hit us in succession in November (Exception: October 2004, which provided more than 100" at Alta).

Right now, the forecast for the several days of the month looks perfect.  A broad ridge is expected to build in over the west over the next few days.  Other than a shower or two today, it looks pretty dry.

The extended is always more of a crap shoot.  The GFS 500-mb height forecast for next Friday, October 10, shows a Rex Block (a.k.a. high-over-low) block along the west coast (upper left hand panel).  For the most part, the various members of the Global Ensemble Forecast System (GEFS) agree with this solution (lower left). 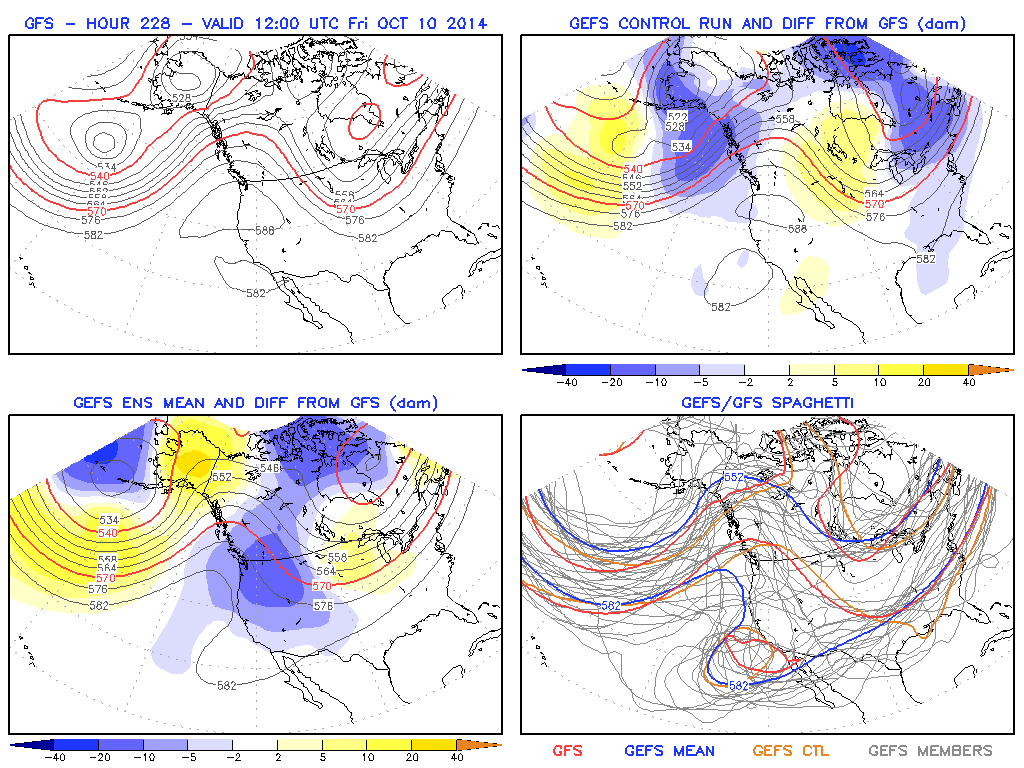 The ECMWF ensemble has a somewhat different solution, but still hints at the jet being to our north, although one can't rule out the possibility of something sneaking in here.

So, it looks pretty dry through this coming weekend, after which the models suggest it may remain dry with a greater chance of below average precipitation than near or above average precipitation.  That's just what we want this time of year.  Let the snow hold off for another month, after which the firehose can open, preferably at maximum intensity.
By Jim S Posted at 10/01/2014 02:40:00 PM