Over the past few days, we have experienced a potpourri of convection, updrafts that transfer heat and moisture vertically in the atmosphere and lead to the generation of cumulus clouds and snow showers.  Depending on the place and time, this convection was produced by the Great Salt Lake, daytime surface heating, and/or flow over the mountains.

After a day of skiing yesterday, I visited Antelope Island State Park today.  Antelope Island is a spectacular place, especially in the spring.  The grass is just starting to green up, so the next few weeks are prime time for a visit.

At 11:35 AM MDT, some beautiful cumulus clouds developed over Frary Peak.  They are carried southeastward (left in the photo) by the prevailing northwest flow. 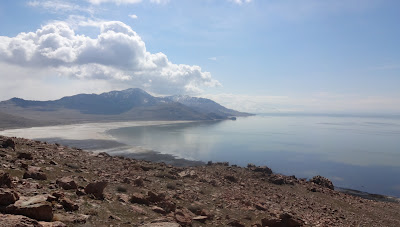 As the day wore on, the convection became deeper and began to initiate over the lowlands upstream of the Wasatch Mountains.  This was our view looking east across Farmington Bay from the Frary Peak trailhead at 1:07 PM MDT.  The KMTX radar showed a greater coverage of radar returns upstream of the Wasatch and the weak evidence of wind-parallel banding.

The photo below was taken a few minutes earlier from a viewpoint a few miles to the north.  It shows an outflow boundary associated with a precipitation-induced downdraft spreading northward (left) near the ground at the base of the Wasatch Mountains.  The very fibrous cloud structures are indicative of cloud ice and snow.  More well defined clouds are comprised primarily of supercooled cloud droplets.  In clouds like these, the ice crystals grow very rapidly, often at the expense of the cloud droplets. 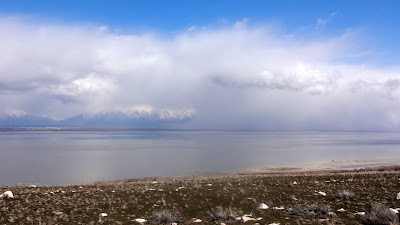 This process, known as the Wegener–Bergeron–Findeisen Process, is instrumental in the development of a large fraction of the Earth's precipitation.  Here's a laboratory demonstration of the process produced by the University of Manchester Centre for Atmospheric Sciences.