Inversion Season Is NOT Over

It is often said that the end of February marks the end of the inversion season, but that is certainly not the case, especially this year when soil moisture and snow depth in the Salt Lake Valley are in what I'll call outlier mode.

It is true that the sun is higher and the days are longer and that this leads to considerably more energy input than we saw a few weeks ago.  However, the ground is saturated and we still have quite a bit of snow on the ground.  As a result, a good fraction of that energy is being reflected back into space or being used to melt snow or evaporate water.  In addition, the Great Salt Lake is still very cold, and that leads to a stable airmass moving over the Salt Lake Valley each afternoon.  The net result is that the vertical mixing was still not vigorous enough to mix out the valley this afternoon.

This can be seen in the sounding from the Salt Lake City airport in which there is a stable layer near the surface, which is the result of cool air from over the Great Salt Lake moving over the Salt Lake Valley, and then another stable further aloft that caps off the valley just below the crest level of the surrounding mountains. 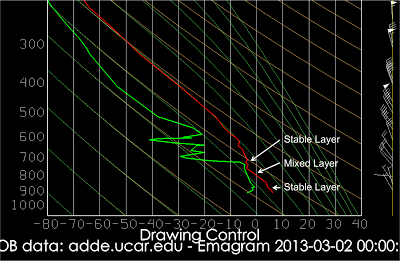 The 50ºF high temperature at the University of Utah, compared with only 45ºF at the Salt Lake City airport, further highlights the stable conditions that exist over the Salt Lake Valley and the strong influence of the Great Salt Lake on afternoon temperatures.

If you don't think this matters for air pollution, think again.  Note how the PM2.5 concentrations at Hawthorne Elementary spiked to about 40 ug/m3 this afternoon.  The 24-hour average is not yet to the National Ambient Air Quality Standard (35 ug/m3), but it is on the way.

This led to a gunky sunset this afternoon over downtown Salt Lake City. 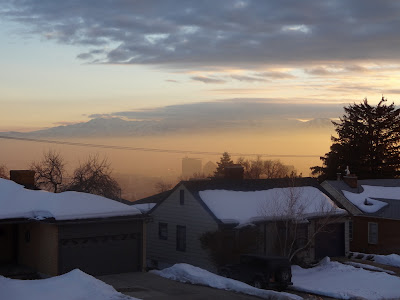 Fortunately, we have only one more day of this and then a trough moves through on Sunday.  I plan on getting out of Dodge tomorrow (Saturday) and enjoying clean air in the mountains.
By Jim S Posted at 3/01/2013 06:37:00 PM