Thunderstorms with heavy rain, frequent lightning, and nearly continuous thunder move north-northwestward into the Salt Lake Valley from the Wasatch Mountains, resulting in a number of issues related to flash flooding. Portions of the northern Wasatch Front were also affected.
The system that affected the northeastern Salt Lake Valley, including Mill Creek, Sugarhouse, St. Mary's, the University of Utah, Downtown, and the Avenues began to develope over the Wasatch Mountains just before 0000 UTC (6 PM) yesterday evening.  At 2352 UTC (5:52 PM MDT), the first strong cell appeared over Big Cottonwood Canyon. 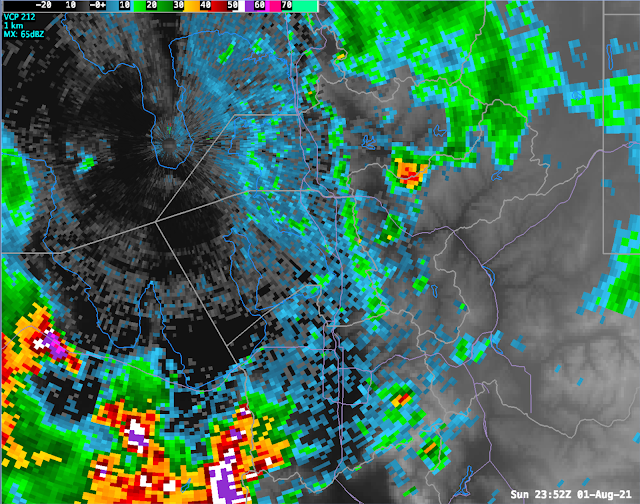 This cell exploded in intensity and coverage over the next 20 minutes.  Anyone recreating in Big Cottonwood or Mill Creek Canyon would have been quickly overwhelmed by heavy rainfall, and possibly small hail.  A second cell began to develop at this time on the Alpine Ridge south of Little Cottonwood. 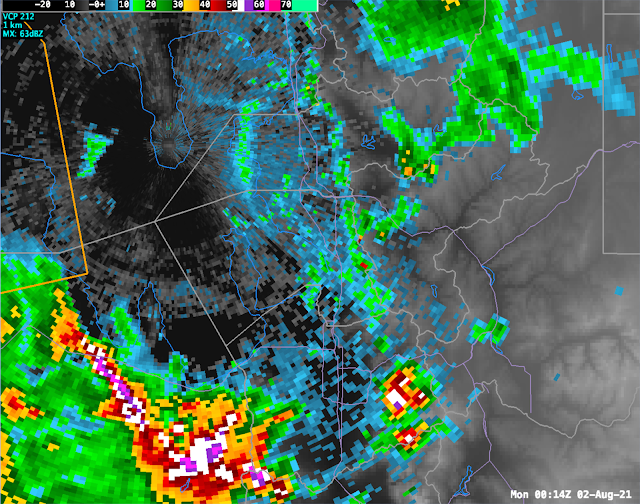 At this point, all hell began to break loose as more thunderstorms developed along the northern Wasatch Mountains as far north as Francis Peak. 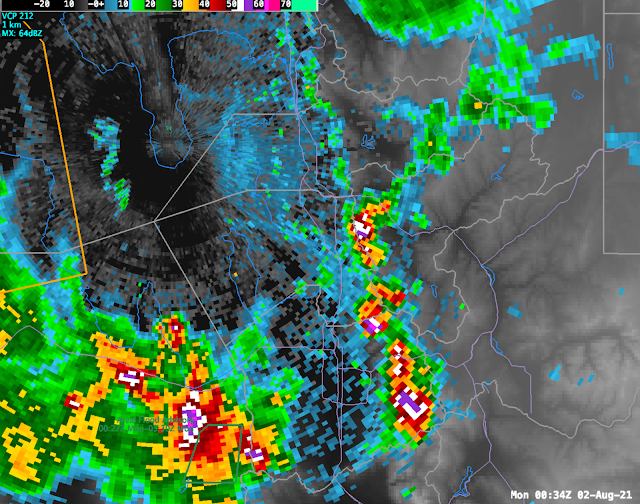 These heavy storms persisted over the Wasatch for some time as the National Weather Service began to issue severe thunderstorm and flood advisories.  By 0107 UTC (0707 PM MDT), heavy rainfall, lightning and thunder, and probably a few areas of small ail extended from Lone Peak nearly to Francis Peak. 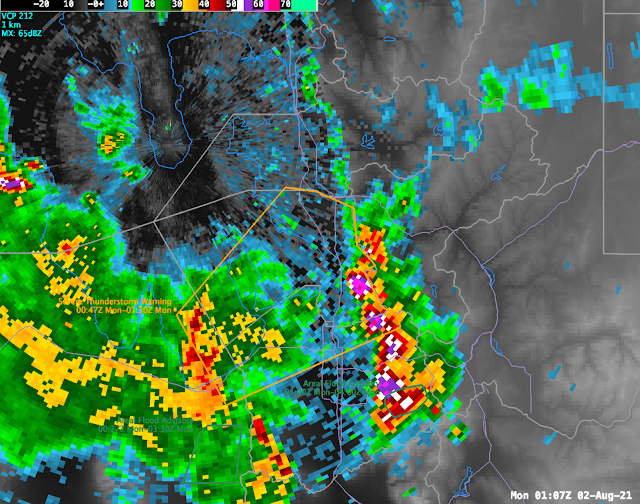 At 7:14 PM, I took the photo below looking southeastward toward the central Wasatch.  It shows heavy precipitation over Olympic Cove and Mill Creek Canyon. 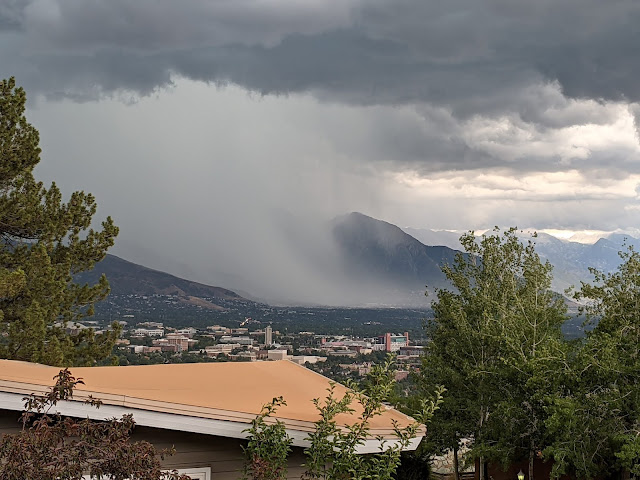 After this time, the system began to move and build westward, and by 0152 UTC (0752 MDT), heavy rainfall with pockets of small hail covered much of the Salt Lake Valley east of I-15, with the heaviest precipitation north of I-80. 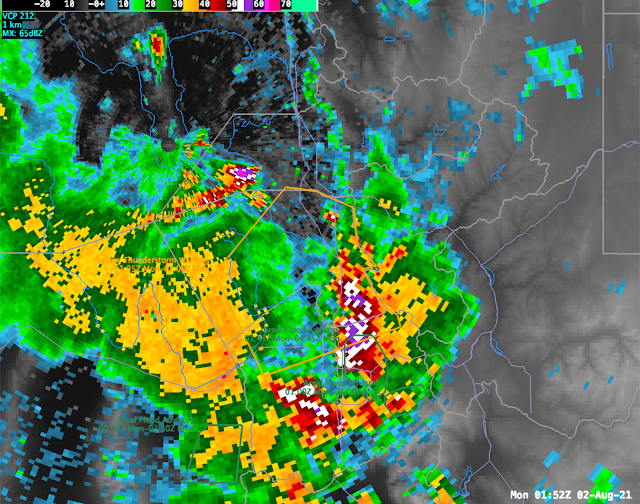 Radar estimated precipitation for the 3-hour period ending at 0307 UTC (0907 PM MDT) shows the heaviest precipitation int two regions.  The first is in the high terrain between Big Cottonwood and Mill Creek Canyons where radar-estimates reach above 3".  The second is in the mountains east of the University of Utah northeastward into the Session Mountains east of Bountiful. 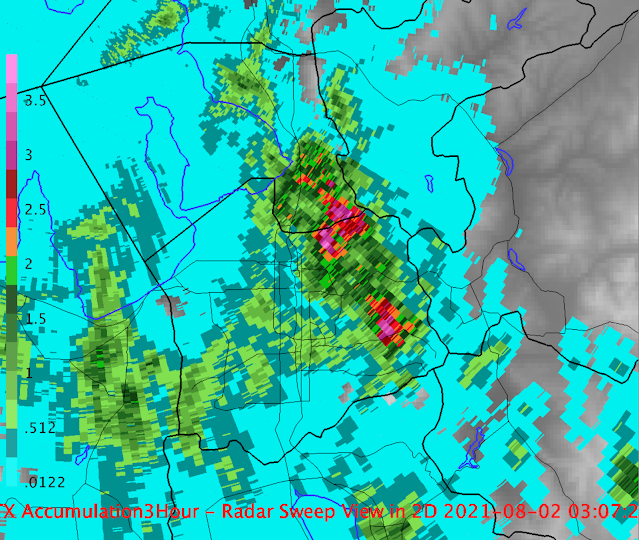 Pacificorp has a weather station at 6600 ft along the Big Cottonwood Canyon highway, very close to the radar-estimated precipitation maximum.  As illustrated in the graphic below, it observed over 3" of rain in less than 2 hours and a peak 10-min accumulation of more than 0.7".

At the University of Utah, almost 1.5" fell, but precipitation rates around 0800 PM MDT were really intense with 1.4 inches falling in less than an hour.

For the area around Big Cottonwood Canyon, 3" in 2 hours has an average recurrence interval of more than 200 years.  For the University of Utah, 1.4"/hr has an average recurrence interval of 50 years.  There are a number of issues at play with the interpretation of these recurrence intervals, so we should be cautious making statements like this was a one-in-50 year storm.  In particular, such intervals are for specific points, not areas, and the local nature of convective storms means that the average recurrence interval for a storm of such magnitude somewhere in the Salt Lake Valley or somewhere in the Wasatch Mountains is shorter (for some discussion of this and other issues interpreting recurrence intervals, see our previous post Misconceptions of a 200 Year Recurrence Interval).  Nevertheless, this was a pretty good downpour.
This morning, it's raining again.  I rode my bike into the office this morning like I used to in Seattle in full rain gear.  I found about a foot of standing water on 11th Avenue, which was closed and I was trying to sneak through on my bike.  Now we need it to stop.
By Jim S Posted at 8/02/2021 09:24:00 AM