Atmospheric pressure, sometimes referred to as barometric pressure, is a measure the total weight (or mass) of the atmosphere.  It decreases with elevation and varies with time due to the passage of high- and low-pressure systems and other atmospheric phenomenon.

Mercury is of course poisonous, but had the advantage of being very dense.  At sea level, the mercury in a well-constructed Torricellian barometer would rise 760 mm (29.92 inches) above the height of the mercury in the bowl.  This is why pressure is sometimes reported in inches of mercury in the US.

If instead you built a barometer out of water, it would need to be over 30 feet tall.  That's quite impractical.  Imagine your local meteorologist reporting a sea level pressure of 33.9 feet of water.

The preferred scientific unit of pressure is the pascal, defined as one newton per square meter (the "US" equivalent would be pounds per square inch or PSI).  For atmospheric pressure, hectopascals are typically used with 1 hectopascal equal to 100 pascals.  A hectopascal is also equivalent to a millibar, which is used by many US meteorologists.

In conversation, I prefer millibar (abbreviated mb) because it rolls of the tongue much more easily than hectopascal (abbreviated hPa).  Millibar is also recognized by more Americans.  However, for scientific publications, I use hectopascals, which is the preferred unit.

The figure below is patterned off a a similar figure that was produced by Greg West at the University of British Columbia.  The base and top elevations of five US ski areas are presented, as well as two international ski areas and Mt. St. Elias is Alaska. 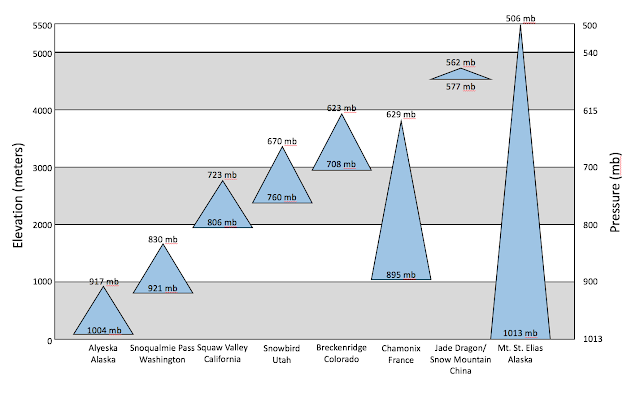 This is a double y-axis plot with elevation on the left and pressure on the right.  Pressure is based on what is known as the U.S. Standard Atmosphere, which is a model of how temperature, density, and pressure change with altitude.  Notice that the change of pressure with altitude is not constant, but decreases as you move higher in the atmosphere since the density decreases.  Below 3000 meters, pressure decreases about 100 mb/1000 meters or 100 mb/kilometer which is an easy number to remember.  Higher up, the values are lower.  For convenience, I've done some rounding of the pressure values on the right to numbers that are easier to remember.

Alyeska in Alaska is the lowest major ski resort in the western U.S., with a base elevation of 90 meters and a top lift elevation of 840 meters.  Based on a U.S. standard atmosphere, this equates to pressures of 1004 and 917 mb, respectively.  As you move to higher elevations, the pressures at ski areas like Snoqualmie Pass, Squaw Valley, and Snowbird decreases.  At Snowbird, the base and summit pressures are around 760 and 670 mb, respectively.  Average sea level pressure is 1013.25 mb, so at the top of the tram, the air pressure is about 66% of that at sea level.

The greatest lift-served vertical in the world is in Chamonix, although my understanding is it requires a guide.  If you ski the full vertical trop at Chamonix, the pressure increases from 629 to 895 mb, or 266 mb.  Relative to the pressure at the top, this is a 42% increase.

What about the highest ski resort in the world?  Apparently it is Jade Dragon/Snow Mountain in China.  I found a few different reports of the top lift elevation and went with the highest, which is 4700 meters (15,420 feet in US units).  There, you're down to a pressure of 562 mb.

Finally, there is Mt. St. Elias in Alaska.  Theoretically, you could ski the longest ski descent in the world from its 5,488 meter (18,808) ft summit to sea level.  Based on a U.S. standard atmosphere, the pressure on the summit of Mt. St. Elias is 506 mb, which is almost exactly half of the pressure sea level (1013.25 mb).  Thus, on the summit, half of the mass of the atmosphere is above you and half is below.  If you could ski the full vertical, you would thus descend through half of the mass of the atmosphere.

I don't think that anyone has skied continuously from summit to sea on Mt. St. Elias.  An Austrian team apparently skied it, but in pieces on two separate expeditions.  Some of the challenges are described in the video below based on an expedition by Mark and Janelle Smiley.