It has been a remarkably boring stretch of weather this summer.  We've had the occasional monsoon surge and a few good rounds of thunderstorms, but nothing to really draw my interest.  That could change later this coming weekend.  The computer models are calling for a tropical cyclone to form off the west coast of Mexico later this week, with its attendant tropical moisture forecast to surge northward into the southwest U.S. and Utah during the weekend and early next week.  The loop below, which shows the GFS forecast valid from 1800 UTC (1200 MDT) Friday through 0000 UTC Tuesday (1800 MDT Monday), pretty much tells the tale.

Critical to this forecast is the interplay between the upper-level trough moving onto the west coast and the tropical cyclone remnants moving northward into the Southwest.  The tango between these two features will determine whether or not the surge comes into Utah, as forecast above, or alternatively misses us to the west or the east.  It will also affect the timing.  Time will tell if it all comes together.

Although it's professional exciting to see a pattern like this setting up, the potential for gully washers and severe weather will be high (by Utah standards).  Flash flooding could be a concern, as well as debris flows in recent fire scarred areas.  This is a pattern that bears watching over the coming days.

Finally, we don't normally waste our time with matters east of the Continental Divide, but this is such a fascinating case that I can't contain myself.  As the tropical cyclone sweeps northward, generating precipitation over the western United States, it contributes to the development of a very strong ridge downstream over the central United States, as shown in the long-range GFS dynamic tropopause (jet-stream level) forecast valid 1800 UTC (1200 MDT) Wednesday 28 August. 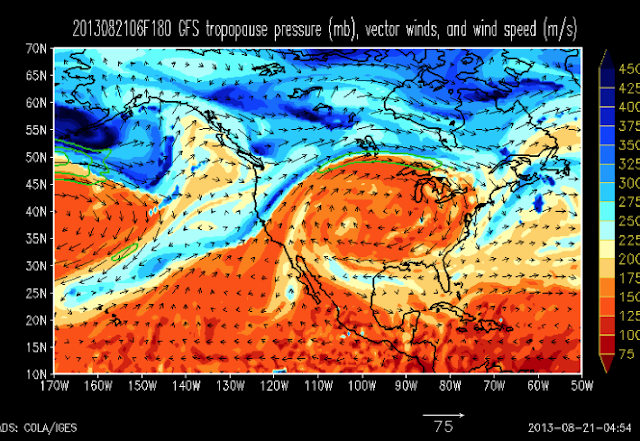 Note in particular the monstrous ridge over the central US.  This is a classic case of what is known as anticyclonic wave breaking, and surfers out there may recognize the "tube-like" nature of the color-fill pattern above.  Should this pattern setup, it's going to be a hot end of August for much of the midwest.
By Jim S Posted at 8/21/2013 08:32:00 AM