During inversions, meteorologists frequently call the airmass beneath an inversion a cold pool.  The name seems appropriate as the dense air, when it is full of pollution or topped by clouds, behaves in much the same way as a pool of water.

In some instances, however, the cold pool is incredibly shallow.  As such, it might be better labeled a cold puddle.  One could observe lingering pollution in such a cold puddle yesterday afternoon over the Great Salt Lake and and lower elevations of the northern Salt Lake Valley.

For most of the day, the Salt Lake City airport was in the warm air, but the temperature dropped abruptly about 14ºF as the cold puddle pushed in. 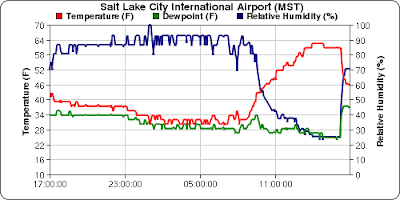 The Salt Lake City Airport and areas to the west can sometimes feel like another planet compared to the University of Utah and the east bench, and that was the case late yesterday afternoon.
By Jim S Posted at 11/29/2012 07:50:00 AM