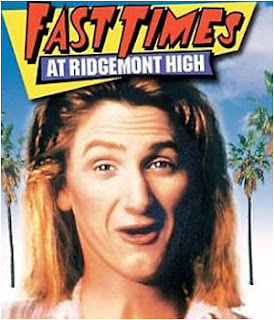 What Jefferson was saying was, Hey! You know, we left this England place 'cause it was bogus; so if we don't get some cool rules ourselves - pronto - we'll just be bogus too!
- Jeff Spicoli, Fast Times at Ridgemont High

Much can be learned about meteorology from Jeff Spicoli.  If I can paraphrase, "What Steenburgh was saying was, Hey!  Ten-day icon-based weather forecasts are bogus, and if we don't get some better forecasts - pronto - we'll just be bogus too!"

Ten-day icon-based weather forecasts have spread through web- and television forecasts like a pandemic.  Here's an example from weather.com. 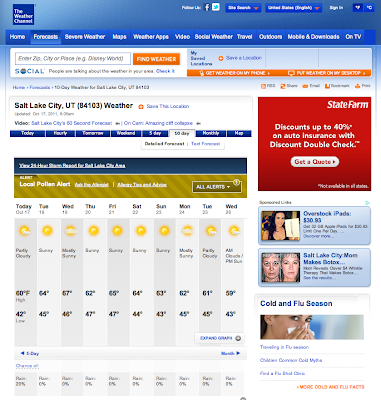 Meteorologists have known for decades that the atmosphere is a chaotic system and have even developed modeling systems known as ensembles to try and get a better handle on the full range of possibilities and forecast confidence.  Sometimes the weather in a particular region is fairly predictable on long lead times, but other times it isn't.  Yet, these icons provide no information on forecast confidence, with the exception of the chance of rain at the bottom.

Numerical weather forecasts are sensitive to their initial conditions, and this places a limit on weather prediction and forecast skill.  Let's take, for example, the forecasts produced by the 0000 UTC Global Ensemble Forecast System (GEFS).  These forecasts start with very similar, but slightly different, initial conditions that are consistent with the available data.  If we look at the 12-h 500-mb height forecasts valid this morning, they are virtually indistinguishable.

But, there is more variability in the ensemble members when we get out 10 days, which corresponds to the weather.com forecast of AM clouds/PM sun for Oct 26.

Because there is some agreement amongst the ensemble members, a best-guess forecast might be for dry conditions to prevail on Oct 26th, but that's not guaranteed and we simply can't justify a single forecast of AM clouds/PM sun, high 59, low 43.  This example is relatively benign, but sometimes the ensemble is very mixed or hints at the potential of high-impact weather event.  In both cases, the lack of predictability or the possibility of a major storm are entirely glossed over in an icon-based forecast.  The bottom line is that icon-based 10-day forecasts are bogus and, if you use them, then you'll be bogus too.
By Jim S Posted at 10/17/2011 09:04:00 AM