When Will Winter Begin?

The original title for this post was "when will winter return," but it's only November 15th, so it hasn't really started yet.  Better to say "when will winter begin."
This has been one of the more bizarre starts to a ski season that I can remember. Alta is reporting 81" of snow so far this season, based largely or entirely on observations taken at the Alta-Collins site at 9662 feet.  The Alta Coop site in town has reported 58.7".  Long-term records for that site indicate an average of 30.6 inches of snow in October and 62.8 inches of snow in November, so we'll round it to an average of about 45" through November 15.  Clearly we are running above average, which sounds good.
Indeed, there is a very solid 31" of snow at Alta-Collins and we are running above average for snowpack water equivalent at the Snowbird SNOTEL site at 9177 ft.  If you are above 9000 feet on north aspects, there's a pretty healthy snowpack in the central Wasatch for mid November.
Elsewhere, not so.  Below is a photo taken yesterday at Alta from "West Buffler."  Looks like a good November ski day.  Decent cover.  Tracks everywhere.  Lot 2/3 full.  However, you can see how thin the snow is across the highway on the south aspects. 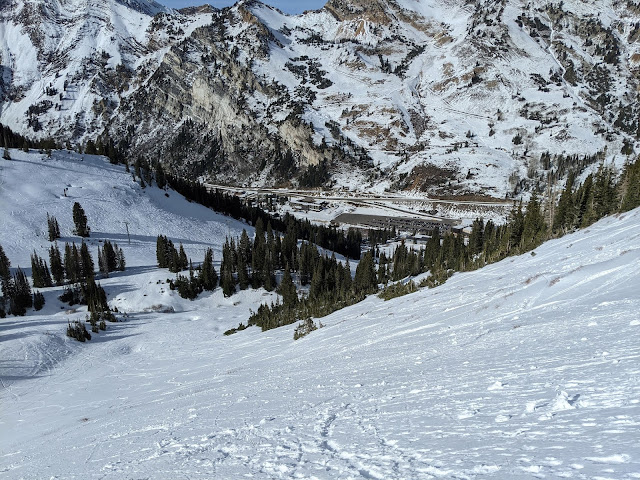 Drive a bit down the highway to the bottom of Big Emma at Snowbird and snow is scant.  By the time you get to the White Pine lot is is nearly non-existent.
We've had above average snowfall so far, but a significant fraction of that snow came in October.  The Alta Coop site had 48.5 inches in October and only 10 inches so far in November.  It would have been better if it were the other way around.  Early snow is vulnerable snow, and we've lost a lot of it except on high north aspects.
Additionally, it has been warm.  At the Salt Lake City airport, where records go back to 1874, the average temperature during the first two weeks of November was 50.4˚F, the 7th highest on record.
The news for today isn't much better.  Forecast 700-mb (10,000 ft) free atmosphere temperatures for this afternoon are around 6˚C, typical of late September.  More loss of south facing and mid elevation snowpack where it exists can be expected.
A weak front is expected tomorrow, which will drop temperatures for a bit.  I suspect you'll see snow guns going at Alta Tuesday night and into Wednesday.  There's a weak system again for Friday, but overall the pattern is one that favors above average temperatures, below average precipitation, and limited periods with good snowmaking conditions.
October came in like a lion, but November may be a lamb.  At least there's snow on high north.
By Jim S Posted at 11/15/2021 08:02:00 AM