Picking up with the end of the previous post, how do we explain the distribution of snow in the photo below taken on Wednesday, especially in the circled area where there appears to be a decrease in snow with elevation?

My best hypothesis is that this is the result of two mechanisms.  The first is the cold outflow that occurred that morning from Parley's Canyon.  The image below illustrates the locally cold nature of this outflow based on station observations from the region at around 1500 UTC (0900 MDT).  The station immediately upstream (along I-80) of the mouth of Parley's Canyon is reporting a temperature of 31˚F, considerably colder than the station south of the mouth of Parley's Canyon where it was 40˚F.  These two stations are nearly at the same elevation. 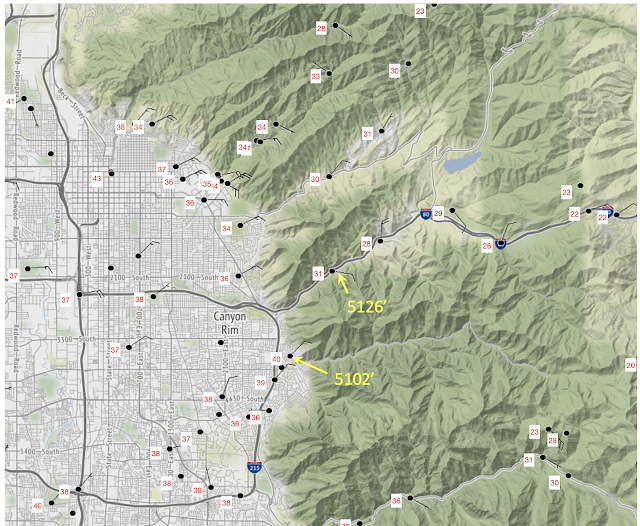 I suspect the outflow from Parley's was colder than the air south of the Canyon, resulting in locally lower snow levels and colder ground temperatures, enabling accumulating snow at lower elevations.  You can see this contrast in snow level quite clearly in the photo above.
Such effects are very common in the Cascade Mountains of Washington and the coastal mountains of British Columbia and Alaska where they are even more pronounced due to the large temperature contrast between marine air and continental air.  During the winter, continental air channeling through passes and Fjords frequently leads to locally low snow levels.  When I was living in Seattle, this was a critical forecast consideration as the snow level in Snoqualmie or Stevens Pass would often be lower than at Crystal Mountain.  I even wrote a paper on it if you want gory details (The Influence of Terrain-Induced Circulations on Wintertime Temperature and Snow Level in the Washington Cascades).
However, if you look carefully in the circled area, you can actually see that there is snow coverage at lower elevations below a mid-elevation band where there is no snow.  WTH is that all about? Precipitation processes are such that I doubt that one was seeing snow forming and falling in that low elevation area when it was precipitation free just a few hundreds of meters aloft.
Instead, I think we need to consider a second mechanism, although it is also related to the Parley's outflow and its ability to transport snow horizontally.  Unrimed snow crystals have a fall speed of 0.5 to 1 meter per second (1.5-3 feet per second).  This is much slower than the strength of the wind during a downslope windstorm.  Even a 10 mile per hour wind equates to almost 15 feet per second.  An unrimed snowflake in such a wind is transported 15 feet for every 3 feet it falls.  If the wind is stronger, the contrast becomes even larger.
A good example of this process is a phenomenon known as a "snow foot."  In the photo below (taken on a different day). A convective cell is producing heavy snowfall in the left side of the image.  It is also producing a downdraft, which is flow that is descending rapidly toward the ground.  When it reaches the ground the flow spreads out creating strong winds near the surface.  As a result, the snow is transported rapidly away from the convective cell, resulting in snow at the ground in an area where there is little or no snow aloft. 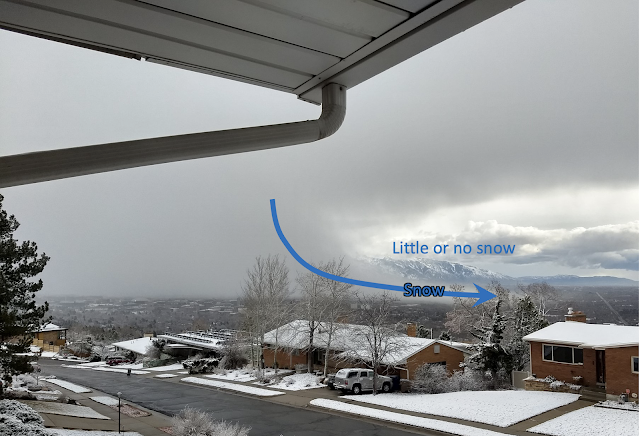 This process can also occur on the lee side of mountains.  Below is a radar cross section (vertical slice) through a winter storm in the Snowy Range of Wyoming.  The left side of the image is the windward side of the mountain, and there are radar returns in that area as the flow ascends the range.  The right side is the leeward side and there are few radar returns in that area.  However, there is a very narrow protrusion of radar reflectivity that extends near the surface into the lee.  Here, strong downslope flow is carrying snow generated over the windward side and crest of the mountain into the lee, creating a snow foot.  The black lines with arrows are the estimated paths of snowflakes and you can see the transport.

My hypothesis for the circled area is that you are seeing the effects of low-level snow transport by the strong winds fanning out at the mouth of Parley's Canyon.  This is leading to snowfall accumulation at low elevations at a time when either there was no precipitation falling aloft or it was actually raining in that mid-elevation region where the air was warmer (some of this rain would have mixed with the snow as it fell into the snow foot.  The precipitation that you observe at the ground doesn't always form directly overhead.
There are a few other possibilities and you should share your observations and views as hypotheses are subject to testing and revision in the face of new data or perspectives.
By Jim S Posted at 4/16/2021 08:54:00 AM