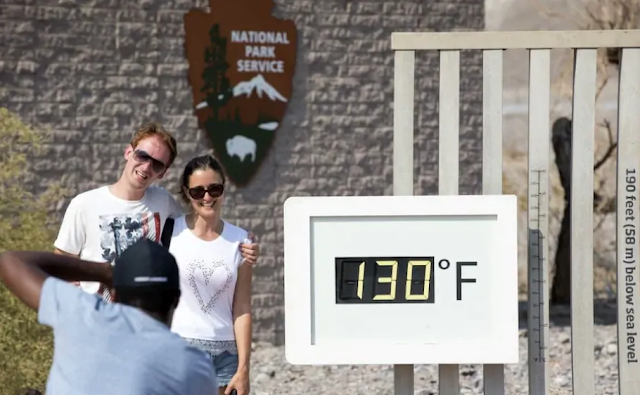 It appears that this is the third highest temperature ever recorded on the face of the Earth, behind the 134˚F recorded in Death Valley on July 10, 1913 and 131˚F in Kebili, Tunisa on July 7, 1931.  Both of those early 20th century temperatures have, however, been called into question by weather historian Christopher Burt (see this Capital Weather Gang article).

Let's have some fun and compare the 134˚F day in Death Valley to yesterday's 130˚F.  We can do this using the 20th century reanalysis, which has created global atmospheric analyses from 1835 to 2015.  The 20th century reanalysis is a product of mathematical and statistical wizardry in which surface observations, which are essentially the only observations available in the 1800s and early 1900s, are used to create an analysis.

Below I plot the 500-mb analysis for 0000 UTC July 11, 1913, which corresponds to 5 PM on the afternoon of Death Valley's 134˚F day.  Death Valley was beneath a west-to-east oriented upper-level ridge, which meteorologists refer to as zonally elongated.  500-mb heights over Death Valley were a bit higher than 5940 meters. 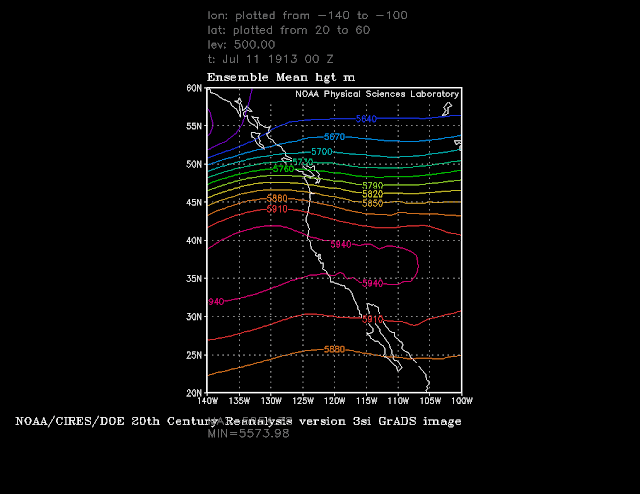 The 850-mb (about 5,000 feet above sea level) temperature analysis (in degrees Kelvin, subtract 273 for Celsius) shows temperatures near Death Valley of about 306K, or 33˚C (sorry for K, but it's what the 20th century reanalysis site provides).  Assuming constant density to the elevation of Furnace Creek yields a temperature of about 48.5˚C (119.3˚F).  A quick note that there are good reasons why the maximum surface air temperature might exceed this constant-density temperature estimate in Death Valley (and indeed, in Salt Lake City, the maximum surface air temperature in summer is often 3˚C/5˚F higher than such an estimate).  Thus, is is provided for comparison rather than absolute purposes. 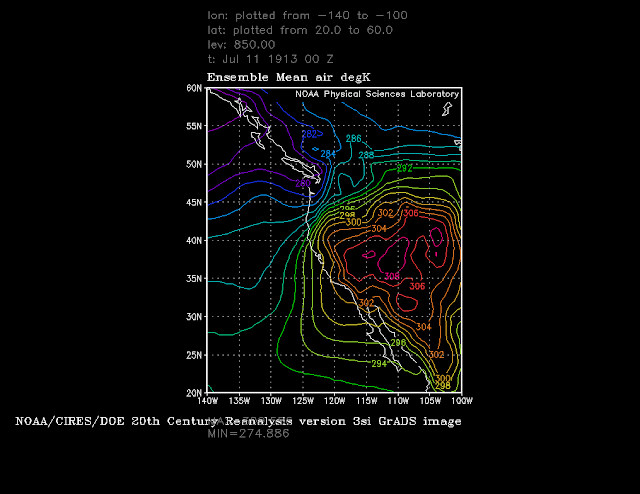 Yesterday, when Death Valley hit 130˚F, the ridge orientation was somewhat different.  It was centered over Utah and elongated from south to north, or what meteorologists call meridonally elongated.  500-mb heights over Death Valley were above 5970 meters, so a bit higher than on the 134˚F day. 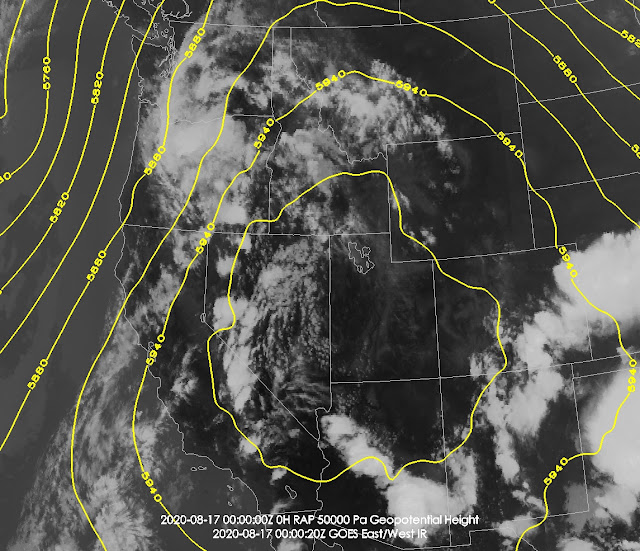 850-mb temperatures were around 35˚C, also higher than on the 134˚F day.  Assuming constant density, that would yield a temperature at the elevation of Furnace Creek of about 50.5˚C (123˚F). 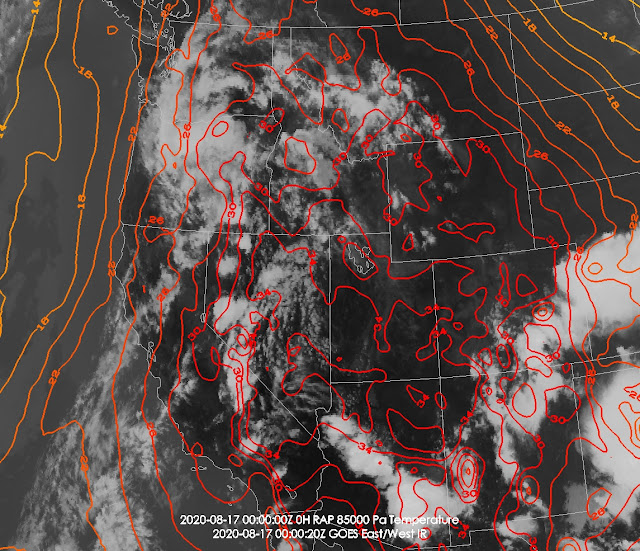 Maximum surface temperature is dependent, however, on other factors, including the land-surface conditions, cloud cover, etc.  I lack the time to dig into this, but suspect the team that investigates the veracity of the 130˚F measurement will be considering these factors and it is something that Christopher Burt discusses in his analysis of the 134˚F day.

That team will also investigate potential instrumentation biases, which hopefully we will hear about soon concerning yesterday's maximum.

In any event, yesterday does appear to have been an exceptionally hot day in Death Valley, amongst the hottest weather conditions ever measured on the face of the Earth.  Sadly, we will probably yesterday's maximum eclipsed in the coming decades as global warming continues.