If it seems like March is milder than it used to be in Salt Lake City, you're right.

Looking at decadal-average temperatures at the Salt Lake City International Airport shows that March was warmer over the past 10 years than any other prior decade ending in 9.  The mean march temperature for 2010–2019 was 46.5˚F, 1.6˚F warmer than the next closest decade, 1990-1990, which averaged 44.9˚F. 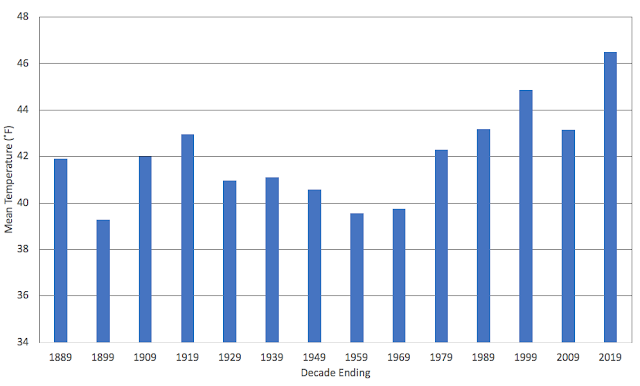 This time of year, it takes about 13 days for the average temperature to increase 4.5˚F.  For example, the average temperature on March 2 is 39.5˚F and by March 15 it is 44.  Thus, the 4.4˚F warmth during the past decade is the equivalent of spring coming about 2 weeks earlier than the long-term average.  The difference compared to the relatively cool 1950s and 1960s is even larger.  Those people must have been wondering if spring would ever come!

So, over the past decade, March has been more of a lamb than a lion.  What happens in any given year is still strongly dependent on the whims of the jet stream and any decade on slow variations in the large-scale circulation, but we're starting to head solidly into abnormally warm territory.  My money is on seeing a greater frequency of warm March's as we move forward through the 21st century and that we won't see a decadal average below the 1875–2019 average of 42.1˚F ever again.
By Jim S Posted at 3/07/2020 03:22:00 PM