The Front Range Bests the Cottonwoods in the Late Spring

Utah powder skiers like to look down there noses at Colorado and for the most part with good reason.  If you are a resort skier, Alta and Snowbird get more snow, have more frequent powder days, and have better terrain than any resort in Colorado.  In the backcountry, the Park Range north of Steamboat gets quite a bit of snow, but for the most part, the Cottonwoods are snowier than the mountains of Colorado.

That changes, however, in the spring when portions (maybe all) of the Front Range get bragging rights, as evident in my Twitter feed this morning.

and quotes like "ski the snow on the ground, not the date on the calendar."


It is dumping snow in the Colorado Mountains right now! "Ski the snow on the ground. Not the date on the calendar" pic.twitter.com/pOzng4VyND
— Damon Lane (@KOCOdamonlane) May 3, 2018

Late season snow is not uncommon in the Front Range.  In fact, at Berthoud Pass, the snowiest months of the year are March and April.  And if you compare the mean monthly snowfall at Berthoud Pass to Alta, you find that while Alta has bragging rights for most of the winter, Berthoud is in a near tie in April and bests Alta in May.

In part, this reflects the fact that Berthoud Pass is higher than Alta and receives a greater fraction of precipitation as snow in the late spring.  However, it also reflects seasonal circulation changes. Although Alta receives more precipitation (water equivalent) then Berthoud from September to April, Berthoud is wetter from May to August.  May is a transition month in which the two sites receive nearly equal precipitation, but Berthoud gets more snow due to it's elevation and colder climate. 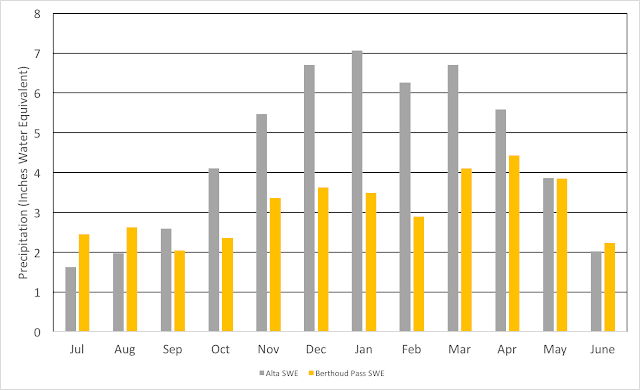