Cascadian Skiing in the Wasatch

You just have to love a rainy day like this when we reach May.  Anything from here on out is a blessing and loved by all the vegetation.

Not willing to give up on the ski season, however, we had a Cascadian experience in Little Cottonwood Canyon this morning.  The drive up the canyon was entertaining enough.  There are probably only a couple of days each spring where everything is green and cloud base is near the canyon mouth to give you views like those below in the lower canyon. 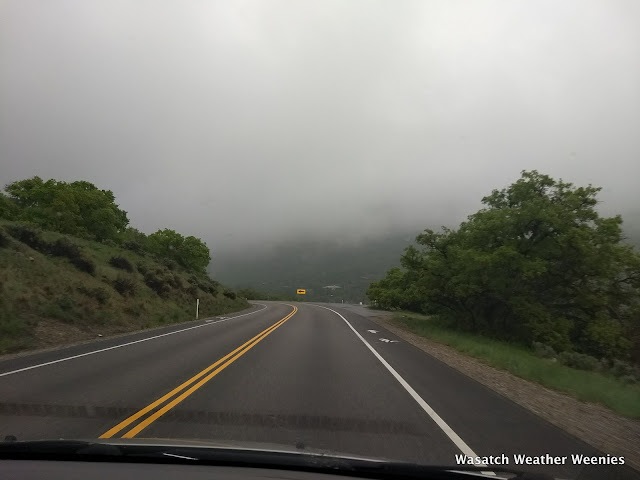 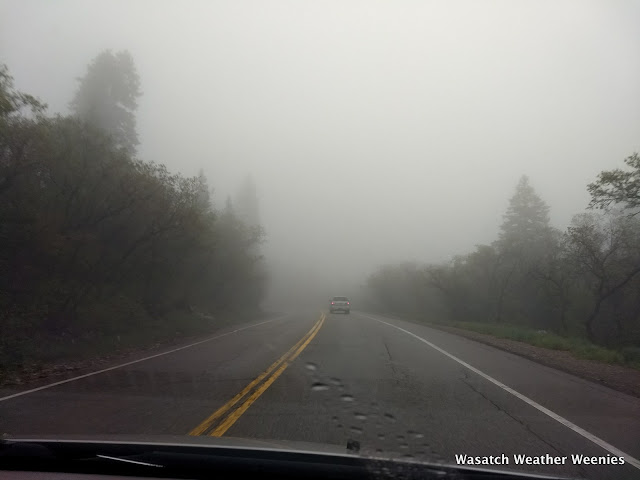 The Alta web cams suggested that we might break out and be in only occasional murk above 8500 feet and indeed we broke out, temporarily, at the base of Snowbird. 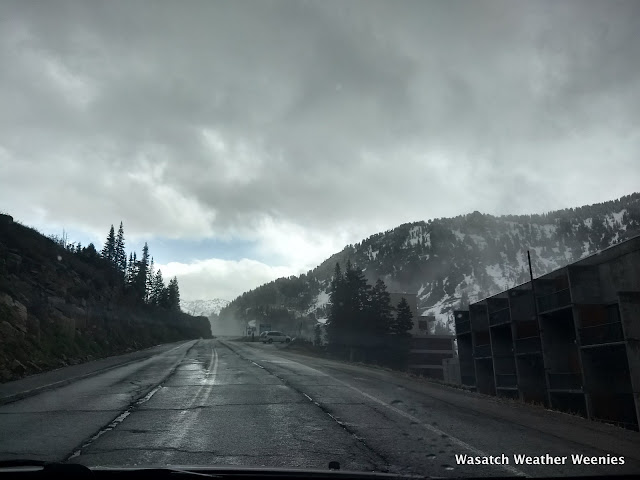 The view from the parking lot was beautiful when we arrived, although the clouds were in and out during our tour.  Sadly, Superior is quickly losing it's white coat this spring. 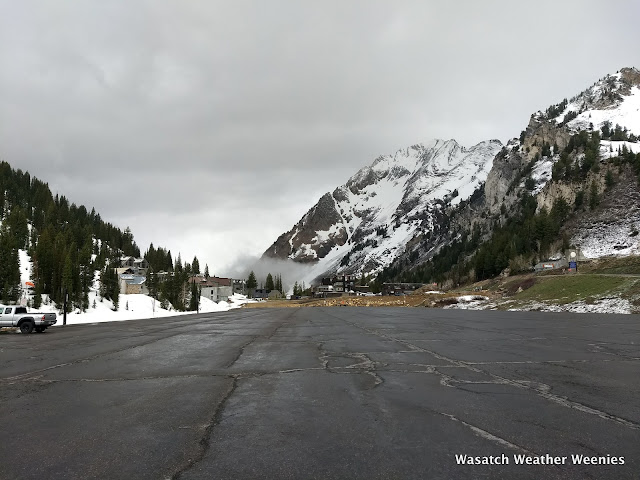 As I've mentioned several times this year, the key to a good ski day is low expectations.  Ours were pretty much rock bottom as we drove up the canyon, but sliding on snow combined with the usual workout endorphins seemed to lift the spirits by the time we finished our first climb. 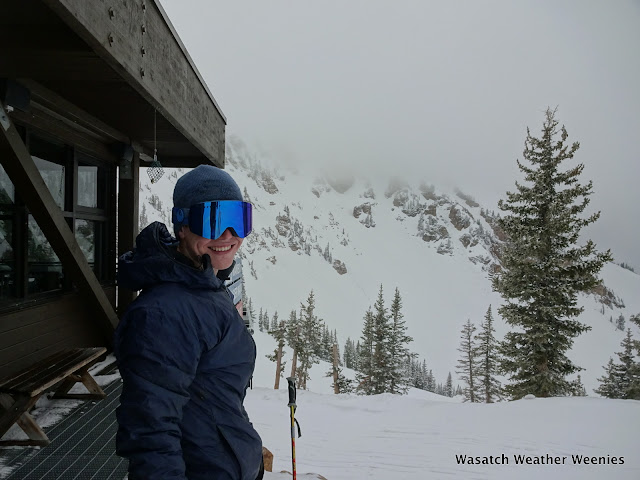 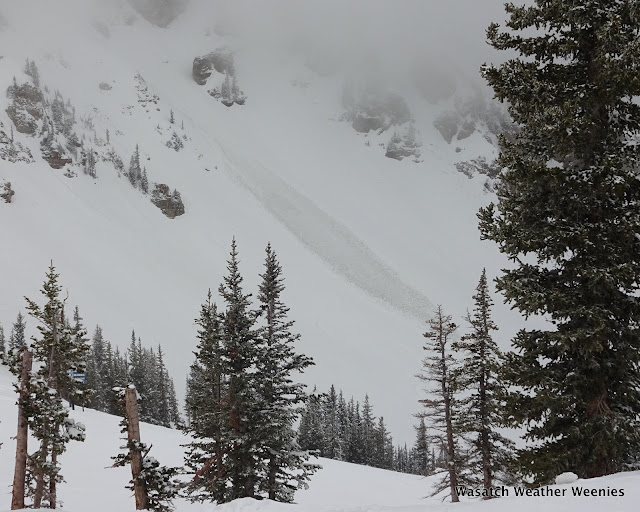 You'd probably have to work pretty hard to bury yourself today, perhaps initiating something that goes into a terrain trap, but a wet slough like that could toss you over a cliff or into obstacles.  The best skiing is often low angle when we get just a few inches of cream on crust anyway, so why push it.

Ski conditions were decent on top with a few inches of cream on crust.  It skied fairly well, perhaps because the underlying surface wasn't frozen hard and was fairly pliable. 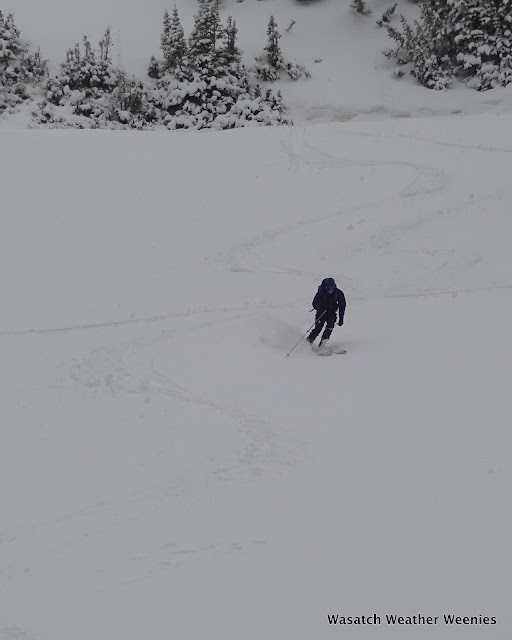 Roller balls abounded in many areas.  Usually you wan't to avoid them at all costs, but they were amazingly soft today and we ended up just pretending the weren't there. 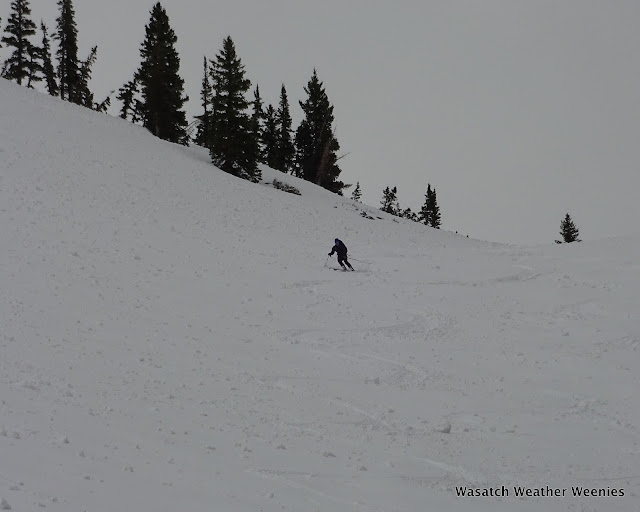 About half way down, we hit the rain line and the high water content snow skied like sandpaper.  You can almost see the friction in the photo below 😃. 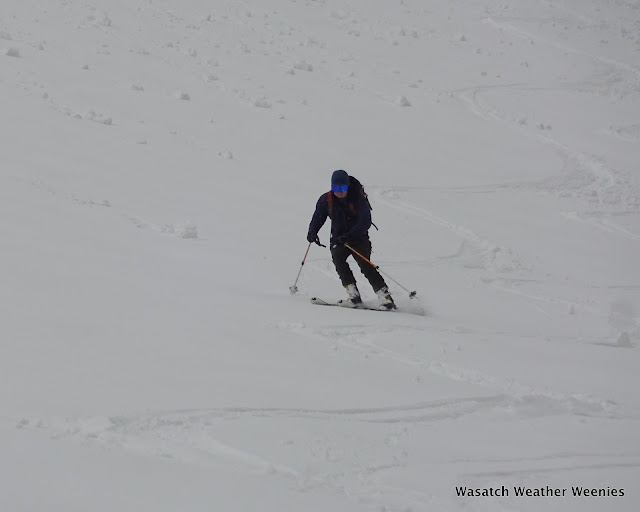 For about 1000 vertical feet, you could just point your skis right down the fall line, do shallow turns, and barely move.  Strange, but surprisingly fun.

Precipitation was pretty limited while we were skiing through about noon.  The Alta-Collins gauge reported only .02 inches from 7 am to noon.  It was strange to descend back down into the "rain forest" of the Salt Lake Valley. 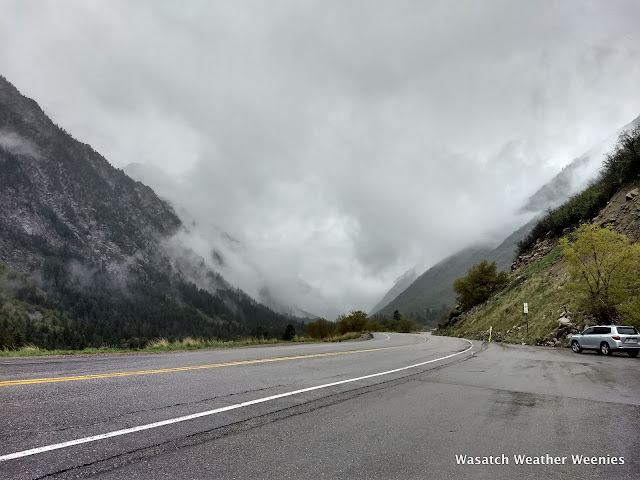