You have suffered long enough through the snow drought of 2014/15.  You've had a couple of good powder days here and there, but for the most part it's been slim pickings.  Mother Nature has been teasing us the past few days with a couple of inches here and a few inches there, enough to whet the whistle, but not to scratch the itch.  However, the models are finally showing some real promise for the next 24-30 hours with a multipart storm that should yield the best ski conditions we've seen since the Christmas holiday.

The NAM loop below shows the multipart nature of the storm.  Mountain snows in southwesterly flow today, a trough passage later today and this evening bringing more, and then a second, colder trough passage tomorrow (Tuesday) morning.

The GFS tells a similar story.  As does the EC.  There are differences in timing and amounts, but they aren't huge.  And the snow of the past few days will provide a bit of a cushion for all this snow to fall on.

The meteogram below shows that the NAM is producing an even 1 inch of water equivalent at Alta Collins (lower left pannel) by Tuesday.  Most of this will fall as lower density snow, although we might see a slight increase in snow density today to perhaps give us a layer of weakly inverted snow that might be noticed by the snow snobbiest backcountry travelers tomorrow.

The view that this will be a significant event is supported by the other models and our downscaled ensemble forecasts.  Nearly all members of this ensemble are producing at least an inch of water.  Thus, confidence is high that this will be a significant event.  I like a storm total of 12-24 inches for the upper Cottonwoods from early this morning through Tuesday based on the latest forecasts. 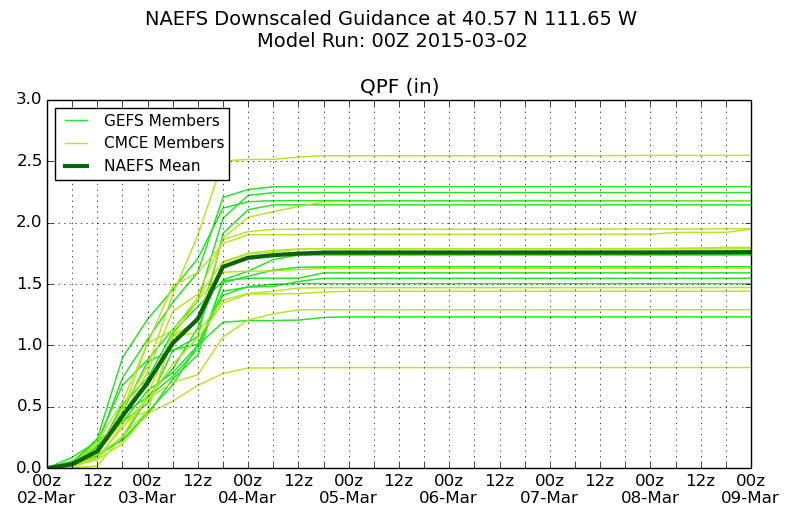 That's about the most bold forecast I've made all year, but when the individual models and ensembles agree, you have to go with it.  If Alta doesn't get at least 12 inches out of this, I'll be very very disappointed.

Therefore, I'm declaring this Official Call in Sick Week for three reasons.  First, this is the best storm cycle we've seen since Christmas.  Second, if you look at the ensemble plume above, you'll notice it's flatlined after this storm.  Yup, ridging returns and it looks dry for a while (warmth and sun later in the week are sure to do some damage).  Third, well I forget the third, but do you really need three reasons?  Get on it, but backcountry travelers be cautious as the UAC is expecting increasing avy hazard.  Keep powder fever in check.

Park City readers: I'll be giving a talk and book signing at Dolly's Bookstore on Main Street in Park City at 6:30 PM this Thursday, March 5th, at 6:30 PM.  Drop by and enjoy a discussion of the history of the Greatest Snow on Earth, avalanches, and other topics of interest to Wasatch Weather Weenies.
By Jim S Posted at 3/02/2015 09:11:00 AM