As discussed in the previous post, there's a pretty good chance that the average temperature for this June and July will be the highest observed since 1948 (when I began my analysis) and very possible since the beginning of records in the Salt Lake Valley in 1874 (at least that's as far back as the National Weather Service goes).

The graph below presents the average summertime maximum temperature at the Salt Lake City Airport each year since 1948.    There are large ups and downs from year to year, but a very gradual upward trend during the period.  The average maximum summertime temperature during 1948–1957, the first decade of this record, was 87.4ºF.  Over the past decade (2003–2012), however, it was 89.6ºF.  An increase of just over 2ºF. 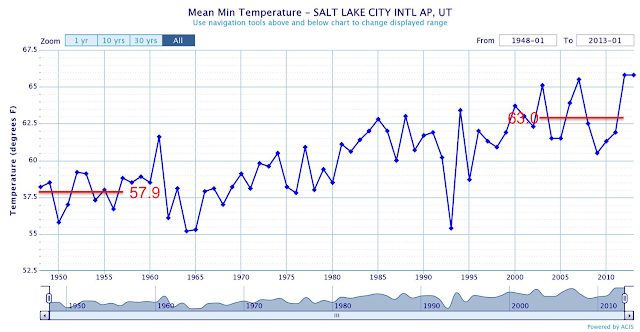 This is not an uncommon finding.  Over the past few decades, many stations have seen a larger increase in minimum temperature than maximum temperature, which reduces what meteorologists call the diurnal (daily) temperature range or DTR.

In a future post, we will talk about possible causes for these trends at the Salt Lake City Airport, but for today I merely want to discuss why the maximum and minimum temperature trends might differ.

The layer of the atmosphere that is in contact with the ground and through which air is mixed is called the boundary layer.   In the afternoon during the summer, the boundary layer over Salt Lake City is typically quite deep, often extending more than 2000 meters (6000 feet) above the valley floor.  Eddies and turbulence distribute energy and pollution through the boundary layer and keep it well mixed (the updrafts favored by paragliders are a result of larger eddies in the boundary layer).  Think of a pot of water in full boil.

In contrast, at night and during the early morning when minimum temperatures are typically observed, the boundary layer over Salt Lake City is typically quite shallow, perhaps 100 m (300 ft) or less.  There's usually an inversion present near the surface (unlike our wintertime inversions, summertime nighttime inversions burn off quickly when the sun comes up).  Eddies and turbulence are quite weak and only mix air through a shallow layer.

As a result, the nighttime boundary layer is very sensitive to any change in the surface energy balance.  If you provide an input of energy during the night, it is distributed through a shallow layer.  In contrast, the same energy input would be distributed through a very deep layer in the afternoon.  As a result, the same energy input in the morning typically results in a larger temperature increase than during the afternoon.

Chances are you've observed this first hand.  What happens when the sun comes up?  The temperature rises very rapidly.  In contrast, in the afternoon, the temperature rise is typically very slow, despite the fact that the incoming solar energy is much larger.  This is because during the morning, the small amount of energy provided by the low-angle sun is distributed through a shallow layer, so it gives you a big temperature increase, whereas in the afternoon, the large amount of energy provided by the high-angle sun is distributed through a deep layer, so you get less bang for the buck (there are some other factors at play, but we won't worry about it for the sake of this demonstration).

The bottom line is that the minimum temperature is more sensitive to a change in the surface energy balance.  In the near future we will explore some of the factors that might be causing the warming trend at the Salt Lake City airport, including the decreasing diurnal temperature range.
By Jim S Posted at 7/23/2013 02:52:00 PM