When I heard yesterday afternoon that a tornado struck Moore, OK, I got a pit in my stomach.  Moore was devastated by powerful tornado that rated as high as F5, the highest rating for tornado intensity on the Fujita Scale, in May of 1999.  Sadly, tragedy had struck again.

Jeff Masters provides a far better summary of this event than I could on his WunderBlog site.  Click here to see his discussion of the historical context of the tornado and the storm structure.  I thought I would take a few moments to put this storm into context for those of us who live along the Wasatch Front.

Many of you will recall the tornado that hit Salt Lake City on August 11, 1999.  It was a day I will never forget as I watched the tornado move directly through the Avenues, very near my home.  It was the first tornado that I had ever seen, and, being a meteorologist, I was so excited to see a tornado that I failed to recognize the seriousness of the event as it was unfolding.


I had never seen tornado damage before and it was sobering.  It was as if someone cut through the Avenues with a surgical knife.  At the center of the path a home would be largely destroyed, while it's neighbors suffered modest damage.  The adjoining homes were nearly entirely undamaged, although they may have been covered with some debris (I discovered debris on the flat porch roof adjoining my home several months later).

The image below shows the results of the damage survey produced by the National Weather Service.  Areas in red suffered considerable damage consistent with an F2 tornado with winds of 113-157 miles per hour. 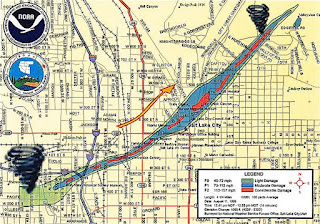 Until recently, tornadoes were rated on a scale of 0-5 based on a system developed by Ted Fujita.  Today we use the Enhanced Fujita Scale, which represents an update based on knowledge gained from storm surveys and damage over the past couple of decades.  The primary difference between the two scales is the magnitude of the wind speed assigned for each level based on damage.  As such, I'll stick with the old Fujuta scale for this discussion.

Tornado statistics such as those presented by McCarthey and Schafer (2004) show that the vast majority of tornadoes rate as F0 or F1.  F2's like the one that hit Salt Lake represent about 19% of all tornadoes (there are some variations in this estimate depending on the period examined).  F3-F5 tornadoes are considered strong to violent and represent a small subset of all tornadoes.  F4 and F5 tornadoes are especially rare.  In fact, you can find a listing of all 58 documented F5 events since 1950 on this web site.  On the other hand, F4 and F5 tornadoes produce the vast majority of tornado fatalities.

All tornadoes are terrible for those who sit in the path, but the damage contrast between an F2 tornado like the one that hit Salt Lake and an F4 or F5 tornado is staggering.  The F2 produces significant damage such as roofs torn off homes, uprooted trees, etc.  F4 or F5 tornadoes produce devastating or incredible damage.  Well constructed homes are completely leveled, and the damage path can be very wide – sometimes more than a mile.

On the other hand, the storms that produce F4 and F5 tornadoes tend to be long lived and are more easily identified with current radar systems.  Tornado warnings for F4 and F5 tornadoes can often be issued with lead times of many minutes (sometimes tens of minutes).  The tornado warning for Moore appears to have been issued at 3:01 PM CDT (2001 UTC) yesterday afternoon. (Correction: As noted in the comment by Andrew below and documented on the web page he cites, the original Tornado Warning was issued at 2:40 – the warning below is for a Tornado Emergency, indicating that widespread damage is continuing.  When I saw the warning and emergency below, the lead time was so impressive I wrongly assumed it was the original.  Kudos to the NWS).

It is likely that hundreds of lives (maybe thousands) were saved by this warning, yet we still mourn the tragic loss of at least 24 people (maybe more) today.  Our thoughts and prayers are with the residents of Moore today, as well as others being impacted by this tornado outbreak.
By Jim S Posted at 5/21/2013 09:06:00 AM