Climatologically, the highest frequency of significant (F2 or greater) tornadoes in the world occurs the southern Great Plains during the spring.  That's why the region is appropriately referred to as Tornado Alley and why Norman, Oklahoma has become the nexus for severe weather research, forecasting, and education in the United States (with a tip of the hat to many talented people who helped to make it so).


We don't usually think of Tornadoes as a mountain meteorology problem, but it turns out that the severe storm environment of the Great Plains is partly a consequence of topography and land-sea contrasts.  During the spring, the confluence of dry, downsloped air from the deserts and high terrain of the southwest US and northern Mexico (airstream SP below) with cooler, moister air originating over the Gulf of Mexico (airstream M) frequently leads to the development of the dryline.  The dry, downsloped air often continues to move eastward over the moist Gulf air, leading to the development of what meteorologists call an elevated mixed layer.  The confluence of these airstreams and the formation of the dryline is related to the development of lee troughing downstream of the Rockies.  In addition, the location and movement of the dryline can be influenced by the gradual slope of the Great Plains.

This elevated mixed layer is sometimes quite warm and dry and forms a cap or lid that can prevent the formation of thunderstorms.  However, in areas where the cap is weaker, or where a surface boundary or other feature can lead to strong, organized vertical motion, violent thunderstorms can form.

Many of these characteristics can be seen in the regional analysis of 1000-mb dewpoint (contours below), wind, and radar/satellite imagery for ~2100 UTC 20 May, minutes after the tornado moved through Moore Oklahoma.  Note the confluence of dry air from the southwest with moist air from the Gulf of Mexico, which generated a pronounced dryline running from central Oklahoma to northern Mexico. 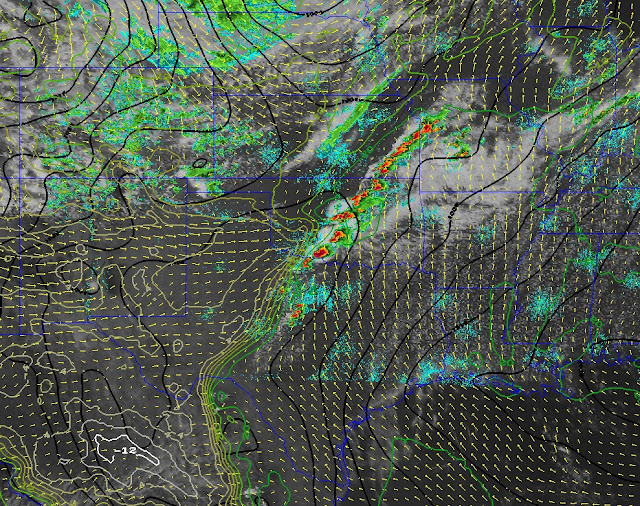 In addition, the sounding from Norman, Oklahoma at 1700 UTC shows how dry, warm air from the southwest has moved over the cooler moister Gulf air, resulting in a temperature inversion just above 850 mb and an elevated mixed layer further aloft.  Imagine if you will in the analysis above that the dry air over and near the Texas Panhandle is moving over the Gulf air to the east to form the elevated mixed layer. 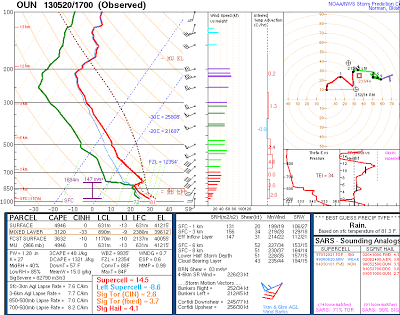 The strength of the low-level jet and its impact on vertical wind shear and northward moisture transport is also influenced by the Rocky Mountains and the slope of the High Plains.

So, the fingers of mountain meteorology are quite long, with influences that extend even into "flatland" regions.
By Jim S Posted at 5/22/2013 01:12:00 PM