The Life, Death, and Resurrection of Ernesto

Life can can be complicated for tropical cyclones crossing through central America and southern Mexico.  Death is almost certain, but some, like Lazarus, can rise from the dead.

The latest to attempt to discover the afterlife is tropical cyclone Ernesto, which moved steadily across the Caribbean Sea and briefly attained hurricane status prior to making landfall on the Yucatan Peninsula.


Ernesto then moved across southern Mexico, but its weak circulation and convective cloud cluster are beginning to move out over the eastern Pacific Ocean.

The National Hurricane Center presently gives Ernesto a 60% chance of reforming as a Pacific tropical cyclone during the next 48 hours. 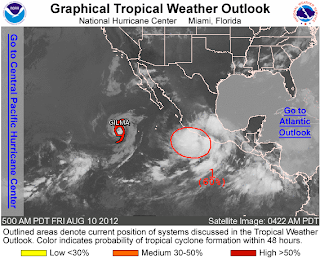 For you mountain weather nuts out there, this process of decay and reformation can be influenced by the topography of southern Mexico, in much the same way that midlatitude cyclones are influenced by interaction with the Rocky Mountains, Alps, and other ranges.

If Ernesto can pull of this resurrection, I believe he will be renamed as cyclones are typically named in order of formation in major oceanic basins.  Up next for the eastern North Pacific is Hector.

Unfortunately for Hector née Ernesto, resurrection here is not a path to immortality.  Eventually he will move over cooler Pacific waters and/or be torn apart by wind shear.
By Jim S Posted at 8/10/2012 08:44:00 AM