As far as cumulus clouds go, to day was pretty unusual in the Wasatch.  Usually during the summer, we have a deep surface-based mixed layer driving thermals that produce clouds with bases well above mountain-top level.  Under such conditions, there's usually only one layer of cumulus clouds and cloud bases are at about the same elevation over the valley and mountains.

That wasn't the case today.  While on Mt. Raymond, we observed shallow cumulus clouds to the northeast in the area around the lower terrain north and east of Mill Creek Canyon.  Presumably this caused some overcast if you were in that area, or at least partly to mostly cloud skies, but for us, it was undercast.  Meanwhile, at higher elevations, a completely distinct layer of cumulus with higher cloud bases formed over the central Wasatch.

Here's another perspective a bit later, although by this time, the lower clouds wer beginning to burn off. 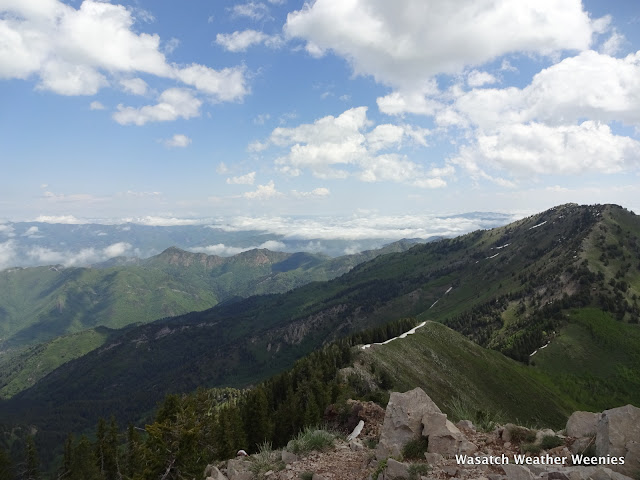 What made today unusual was the complex layering of the atmosphere over northern Utah.  At low levels, a relatively well mixed layer was found (layer 1 below), which, with a little surface heating, supported the lower level cumulus clouds that formed the lower-level cumulus clouds.  This layer was capped by a strong stable layer (layer 2 below), so these low-level cumulus clouds were confined to low elevations (at least in the morning - they may penetrate more deeply this afternoon).  This stable layer is also keeping a lid on the atmosphere over the Salt Lake Valley, leading to hazy conditions.  Above this layer was another well mixed layer (layer 3) that supported the higher cumulus that was forming over the high terrain of the central Wasatch. 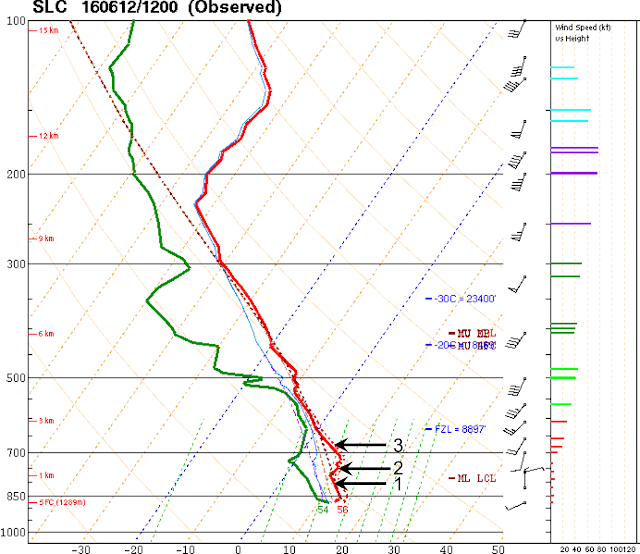