Ah, how I enjoy watching some prognosticators make seasonal climate predictions.  Like sports pundits predicting the winners of college football games each Saturday, they confidently predict what will happen during the coming winter.  If only Mother Nature was persuaded by bravado instead of the laws of physics and the behavior of chaotic systems.

A great beat-down of the seasonal outlooks from last winter was written last week by Joel Gratz of opensnow.com.  My disdain for the "deterministic" nature of these outlooks is well documented, and something described in depth in my post from March 20th, 2016 reflecting on last winter and more recent post Silly Season Returns.

The usual approach taken in producing these outlooks is to decide whether or not the coming winter will feature El Nino, La Nina, or ENSO neutral conditions (i.e., neither El Nino or La Nina) and then make predictions based on past events.  In both of these steps, the outcomes need to be assessed probalistically, meaning that one needs to consider the probability of say La Nina developing and in turn what the likelihood of outcomes is given that development.  Even when this is done, there are challenges.  For example, we have a relatively small number of historical events for calibrating our model and assessing outcomes statistics.

The latest news in the seasonal climate prediction area is that the Climate Prediction Center took down their La Niña watch yesterday.  Disaster! 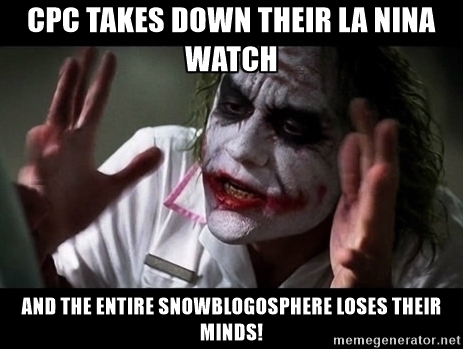 To be sure, outlooks issued by the Climate Prediction Center (CPC) have never guaranteed La Nina.  A La Nina Watch is issued when conditions are favorable for the development of La Nina in the next six months.  CPC outlooks issued over the past few months had La Nina probabilities for this coming winter that varied from about 55% to 75%.  Their latest outlook revises these probabilities downward. Even now, a range of possibilities exists, including the development of La Nina, although the odds of La Nina are lower and the odds of either neutral (i.e., not El Nino or La Nina) or borderline La Nina conditions are higher.

What often happens in the media or in outlooks issued by some meteorologists is that these weighted odds are converted into overconfident outcomes.  An example is an article published by UnofficialNetworks on July 7th, a piece of which I've sampled below.  There is no mention of probabilities anywhere, despite the fact that farther down in the article they actually include the CPC probabalistic outlooks.

I expect with the downgrading of La Nina odds, the forthcoming precipitation outlooks from CPC will see a similar shift in probabilities toward climatological odds.  In other words, we simply can't say with any confidence how this winter will evolve over western North America, except perhaps to say that the dice are loaded a bit for above-average temperatures because of Global Warming.